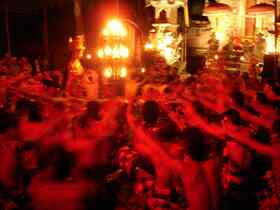 This obsessive sound (resembling the chattering of monkeys) of a choir from beyond the dust of ages suddenly rises between the lofty trees. Darkness looms over the stage. Hundreds of bare-breasted men sit in a circle around the flickering light of an oil lamp chandelier. “Cak-Cak”. They start dancing to the rhythmic sound of their own voices, their hands raised to the sky and bodies shaking in unison.
This is the unique Kecak, commonly called the “Monkey Dance” by tourists.
Originally the kecak was just an element of the older Sang Hyang trance dance. It consisted of a male choir praying obsessively to the souls of their ancestors. At the initiative of painter Walter Spies, this religious choir was transformed into a dance by providing it with a narrative. The ballet is the Ramayana epic. The prince Rama, his wife Sita and his brother Laksmana are exiled in the middle of the forest. Rama goes hunting a golden deer at the request of his wife, who saw the strange animal and has asked him to catch it. While he is away, she is kidnapped by Rahwana and taken to the latter’s island kingdom of Alengka (Srilangka).
Rama allies himself with the monkeys and in particular with the white monkey Hanuman. They build a bridge and cross to the island. War ensues until finally Rama defeats Rahwana and is again united with his faithful wife.