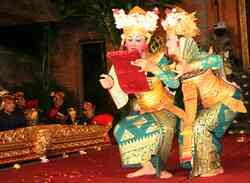 The famous Legong Dance is the epitome of classical female Balinese dancing. A court dance, it was created in the 18th century in the circles of the principality of Sukawati. According to legend, in the mid-18th century, I Dewa Agung Made Karna who was meditating for 40 days and nights saw two dancing celestial angles. After his meditations he passed on what he had seen and heard to his court dancers and musicians. The Sanghyang Legong was born.
Now including a variety of modern ‘free creations’ (tari lepas), the legong is usually the first dance taught to beginners, Months of training are needed to master the perfect mix of posture (tangkep), movements and mimicry. Three dancers in glittering costumes, one condong lady-in-waiting and two princesses whose roles change according to the narrative usually perform it. The ancient legong used to have a storyteller’s accompaniment, but these days they only dance performances.